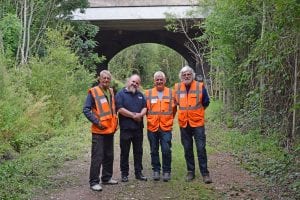 A charity that is working to open the disused South Staffordshire railway as a leisure greenway has received £1,500 donation from M6toll.

Back the Track, a group of 12 volunteers, was selected as one of the M6toll’s monthly winners for its Drive for Charity in the Community campaign.

The fund aims to support community groups and projects across the Midlands as part of a £45,000 initiative.

The charity is actively working to open the disused South Staffordshire railway between Walsall and Lichfield as a leisure greenway, providing a range of benefits to the local community. It will use the donation to fund a container to house maintenance equipment

Mick Roseblade, from the charity, said: “We are a group of twelve, mostly retired, individuals who meet on workdays to remove litter, manage trees, improve pathways on the disused railway. We have currently hired diggers to provide improved drainage and are also working to introduce new access points to Chasewater and the Wyrley/Essington canal towpaths.

“We are delighted to have received this funding, which will purchase a new container to house tools necessary for the provision and long-term maintenance of the greenway.

“By providing new walkways and cycle paths, introducing flora and fauna, benches, improved access, and encouraging wildlife, we are hoping it will get people outdoors.

“We are inviting walking clubs, cyclists, dog walkers and the general public to increasingly use this traffic free greenway – providing health benefits to all users.”

Since the M6toll opened 15 years ago, operators Midland Expressway Limited (MEL) have donated more than £1million to local good causes.

This year, its online scheme will see £20,000 given to one ‘charity of the year’, and dozens of smaller awards made to community projects.

Andy Cliffe, chief executive of M6toll, said: “We are proud to be supporting Back the Track and what is a fantastic facility for the community. It’s lovely to hear about the volunteers who take the time to preserve, maintain and enhance this space.

“We care about the towns and villages surrounding the toll road and our Drive For Charity scheme is designed to support them.”