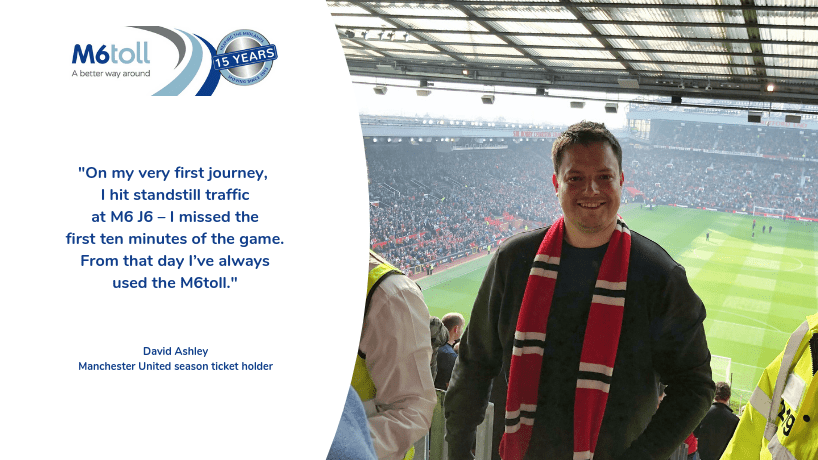 Hi David, thanks for speaking to us. How long have you been using the M6toll for?
My friends and I bought season tickets for Manchester United in 2013, which means regular trips from Nuneaton to Old Trafford. With kick-off times varying so much, and unexpected train delays or cancellations, we’ve always favoured driving. We first used the road for the second game in the 2013 season, and have used it ever since.

Why did you first decide to start using the M6toll?
On our very first journey we hit standstill traffic at junction six of the M6, which didn’t clear until Keele services. We missed the first ten minutes of the game. From that day we’ve always used the M6toll. We have a lot of 8pm matches, which means we’re on the M6 at 5pm – if we didn’t use the M6toll, we’d have to use our annual leave just to get to games on time.

How often do you use the road?
We use it at least every other weekend, and then it’s up to the team – if we go further in cup competitions, we need to travel to Manchester even more. If we’re using the road more often, it means we’re winning games – so it’s definitely a positive!

What do you think the best thing about the M6toll is?
It is important that we skip past all the Birmingham traffic, of course, but when you use the road as frequently we do, it’s the effect it has on planning our whole day. We know exactly how long the journey will take, give or take 15 minutes due to 50mph speed limits further along the M6, and then can make the most of our time, instead of having to allow at least an extra hour due to uncertainty of when we’ll arrive.

Can you think of an occasion the M6toll has ‘saved the day’?
It was in our first season and we were playing the second leg against Olympiacos in the Champions League. When we left the M6toll, we joined awful traffic that didn’t clear until Stoke-on-Trent. We made it to our seats just as the game kicked off – we overturned a first leg defeat and won 3-0. That match becomes more memorable every season, as it was the last time Manchester United won a game in the knockout phases! I have no idea how much of that game we’d have missed had we not used the M6toll.