School’s first aid project hailed a success thanks to M6toll 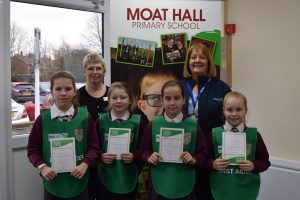 A Great Wyrley primary school is celebrating after 29 pupils passed a first aid course thanks to a £2,000 cash boost from a scheme linked to the M6toll road.

The scheme aims to provide primary schools located within a five-mile radius of the M6toll with the opportunity to access funds for projects and activities that cannot be run through normal school funding.

The primary school, in John’s Lane, applied for the funding to help set up a first aid club for KS2 pupils and two teachers, with training provided by HMB Training Services.

Members of the school council had expressed pupils’ wishes that they wanted to be trained so that they would know how to react, either at school or at home, if there was a medical emergency.

Mrs Yvonne Dickens, who works with the school council, said: “The club is now an integral part of school life, empowering children with the skills, ability and confidence they need to help in an emergency.

“The children were incredibly dedicated during the six-week course. They will now be listed on a duty roster to cover the playground at breaktime, and they will also train other pupils by sharing their knowledge.”

Representatives from MEL attended a special assembly at the school during which the pupils were presented with their certificates and tabards, which they will wear while on duty.

Headteacher Jane King added: “It is a wonderful achievement and shows real determination, resilience and perseverance. We are incredibly proud of them.

“The children were so committed to the project that they had already started fundraising for it. We were therefore delighted to be chosen as winners of this very generous donation which meant that we could start the scheme much sooner than anticipated.”

Maxine Estevez, from M6toll, said: “The School Foundation applications were of an extremely high standard, and we found it difficult to choose a winner.

“Over the years, we have seen what a huge difference the funding can make, and we could see that the first aid scheme was extremely worthwhile. It is clear that the school and its pupils are very dedicated to making it a long-term success.”

M6toll will be launching its new community funding initiative – Drive For Charity – this spring. For more information about MEL’s charity support visit 142.93.39.117